Our choice of timber is dependent on the type of grain and feel that our customers are seeking to achieve. There are certain strong recommendations that we would make and it is also possible to use a mixture of timbers in one piece to achieve contrast and a unique look.

Some recommendations will be based on a structural requirements whilst others are more open to customer choice. In our new ‘Shark’ armchair for instance we use elm for the seat, arms and top comb, ash for the legs, back uprights, slats and under arm supports, and burr oak for the central splat. A simple oiled finish then enhances the differing tones of the timbers to stunning effect. 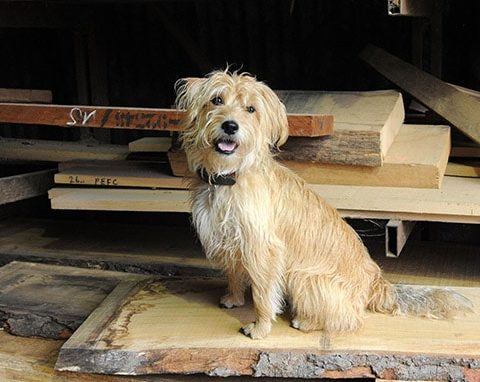 Timber comes to us in raw (waney) edge plank form, cut from the trunks (butts) of trees. Many timbers with a predominantly straight grain will look similar, however they are planked, with more movement of grain toward the outer edges and straighter grain in the centre.

The norm is to plank a butt, flat through its circumference so that the boards will show the crest of the growth rings. With oak in particular, using different angles to cut the planks from the butt can evidence the grain in different ways.

At various times in history “quarter sawn oak” has been much sought after, whereby the angle of the cut exposes the small black flecks in the timber across the surface of the plank. These flecks then evidence themselves as “medullery rays”. Pippy and burr oak is again often cut at varying angles to bring out different features of the grain.